Six Ticks: in the Lyme Light 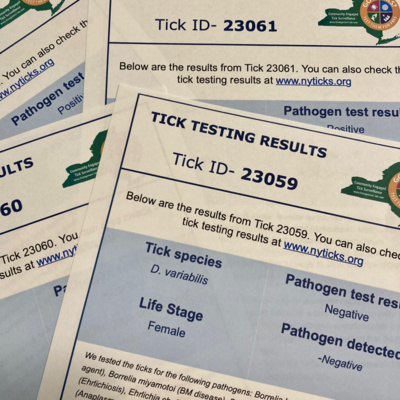 If a tick bites you in the woods, and it's free of disease-causing pathogens, does it matter? We wanted to know how many of our Catskills ticks are pathogenetic, so we sent 6 of them to the Thangamani Lab at Upstate Medical University, in Syracuse, NY. You, too, can send any New York tick, and Dr. Thangamani and his team will test it (for free!) for Lyme disease-causing bacteria, and 16 additional pathogens. It's all part of a massive citizen science research initiative tracking distribution of species and pathogens statewide. You can explore those trends using Dr. Thangamani's tick maps, updated daily by county. NYticks.org is also where forms can be found to submit your own tick(s) for testing. Let us know how it goes!

Thanks to our sponsors: Hanford Mills Museum, the Catskill Mountains Scenic Byway, and The Mountain Eagle.